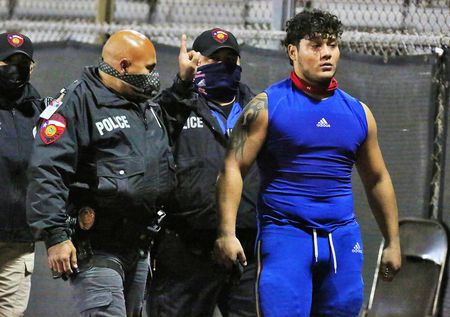 On Thursday night, Texas high school football made headlines, but it wasn't for the spectacular play of any one individual. It was punishment after one player attacked a referee during their win.

A cash surety bond of $10,000 has been set for the football player.

Edinburg CISD removed the entire team from playoff contention after the incident, according to a statement from the district.

Duron got called for a late hit against an offensive player of the opposing high school and was ultimately ejected for an unsportsmanlike penalty. Emmanuel Duron, a senior from Edinburg High School in Texas ran back on to the field and bulldozed the referee who ejected him. That should have been the end of it. Moments later, an angered Duron charged back on to the field, making a beeline straight for Gracia.

Gracia was taken to an ambulance outside the stadium gates and medically evaluated for a potential shoulder injury and concussion-like symptoms, the Monitor reported. He did not return to the game.

Duron is junior defensive tackle and all around top athlete.

Duron was also suspended for the remainder of last year's 2019-20 soccer season after a similar incident occurred on the field against crosstown rival Edinburg Vela. He's scored a rushing TD as a running back and also kicked a 51-yard field goal earlier this season.

The Edinburg Consolidated Independent School District said Friday that Edinburg High School would not be participating in the Class 6A Division I Playoffs despite beating their opponents Pharr-San Juan-Alamo.

A ideal example of this occurred recently during a high school football game in Texas.

"We extend a honest apology to the referee and his family", the school district's statement said.

Earlier Friday, the Edinburg Consolidated Independent School District announced that it had chose to remove Edinburg High School from the playoffs as a result of the incident. "The district takes these matters very seriously; however, we can not comment further on a pending investigation".

The district will consider additional disciplinary action once an investigation is complete.