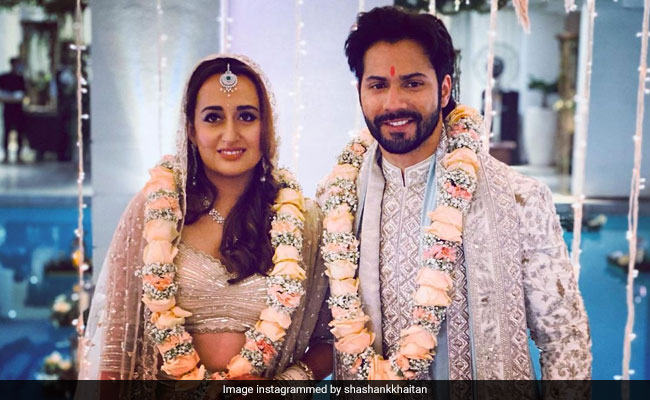 A close friend of Varun Dhawan and also a part of his groom squad, Shashank Khaitan shared an unseen photo of Varun and Natasha from their Alibaug wedding.

The director wrote about how dealing with Varun requires "immense patience" and how Natasha continues to be his rock.

The wedding is planned for January 24 at The Mansion House, a beach resort, in Alibaug.

Social media pictures and videos, shared by fans, show Varun's parents David and Karuna Dhawan leaving in one auto while his brother Rohit Dhawan along with wife Janvi Dhawan and their daughter leaves in another. Also, Stickers are being stuck on the mobile phones of the staff members owing to the no photo policy at the venue. Sharing the photo, Varun wrote, "Life long love just became official", followed by a heart emoji. Those who weren't invited or couldn't make it to the event took to social media to congratulate the newlyweds.

On Kareena Kapoor's Radio Show, Varun said, "The first time I met Natasha was in the sixth standard". ETimes have got some first hand information and some videos from the venue.

Sara Ali Khan showered all her love and best wishes on "Coolie No. 1" co-star, Varun Dhawan and his attractive wife, Natasha Dalal as they took the plunge and officially became man and wife on Sunday. The actress is seen posing for selfies with two other guests at the wedding in the collage she shared on her Instagram story.

Dhawan and Dalal's nuptials took place in the early afternoon, at around 12:30 pm, reported Pinkvilla. As per reports, the rituals went on smoothly.