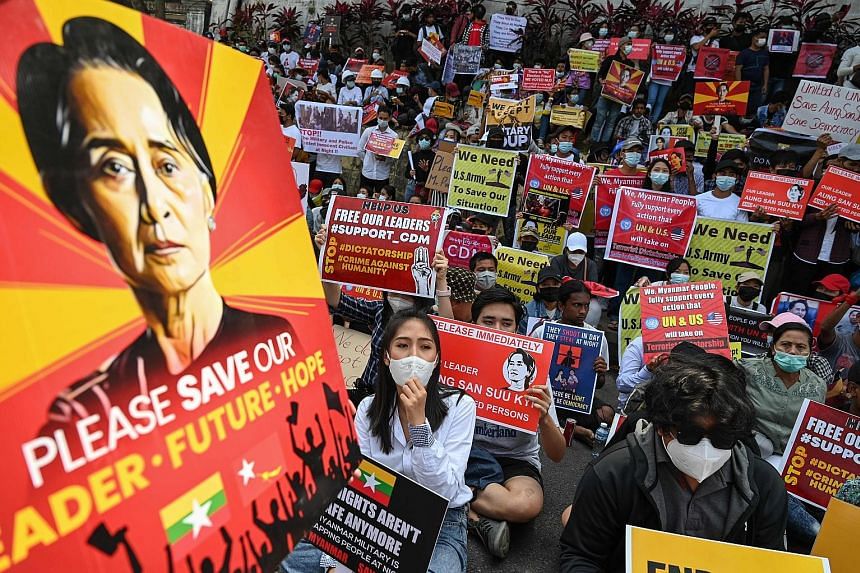 Myanmar security forces faced off with protesters who are against the military takeover in different cities around the country.

The military's justification of its February 1 seizure of powerand arrest of government leader Aung San Suu Kyi and others cameas protesters again took to the streets and after a United Nations envoywarned the army of "severe consequences" for any harsh responseto the demonstrations.

Aung San Suu Kyi's court hearing has been delayed until Wednesday, her lawyer has said, when she will appear via video link at a Naypyitaw court.

Armoured vehicles operated on the streets in Yangon as the military tightened its hold over the country even as protesters demanded freedom for Suu Kyi and a return to democracy.

The security forces fired to disperse protesters outside one plant in Kachin's state capital Myitkyina, footage broadcast live on Facebook showed, although it was not clear if they were using rubber bullets or live fire.

It added: "We denounce the military's interruption of communications as well as the restriction of Myanmar people's fundamental rights and basic legal protections".

An armoured vehicle drives past the Sule Pagoda Sunday, following days of mass protests against the military coup.

Thousands of protesters gathered in Naypyitaw, the nation's capital, and Mandalay, the country's second-largest city.

At the bank, several hundred protesters held up signs urging their colleagues to join the CDM - the civil disobedience movement - and stating their refusal to accept the coup. An armoured vehicle and about six trucks carrying soldiers were parked nearby, a witness said.

During the protests, a 19-year-old woman who was shot in the head with what experts said was live ammunition at a protest in Naypyitaw was on life support in a hospital and was not expected to recover. China did, however, join other UN Security Council members in calling for the release of Suu Kyi and others. Also, a video posted on social media showed citizens fleeing following sounds of gunfire.

The government and army could not be reached for comment.

The army has been carrying out nightly arrests and has given itself sweeping powers to detain people and search private property.

On Sunday, the military published penal code amendments aimed at stifling dissent and residents reported an internet outage after midnight on Sunday which lasted until about 9 am. At least 400 people have been detained so far, Reuters reported, quoting the monitoring group Assistance Association for Political Prisoners.

By afternoon, news of a strong police presence at the city's headquarters of Suu Kyi's National League for Democracy (NLD) party drew thousands to the scene.

Lawyer Khin Maung Zaw said he had not been allowed to meet Suu Kyi or Win Myint and his power of attorney request has not yet been approved by the court.

NetBlocks, which tracks Internet disruption, said on its Twitter account that connectivity was being restored as of Monday morning, but that social media was shut down for eight hours from 1:00 a.m. "And of course, nobody believes them", Andrews said.

Suu Kyi remains under house arrest, but a remand order holding her on a minor charge of possessing unregistered imported walkie-talkies expires Monday. The electoral commission dismissed accusations of fraud.

Foreign embassies in Myanmar, including those of the US and European Union member states, issued a joint statement Sunday saying they "unequivocally condemn the detention of political leaders, social activists and civil servants" and called for an end to violence against protesters.