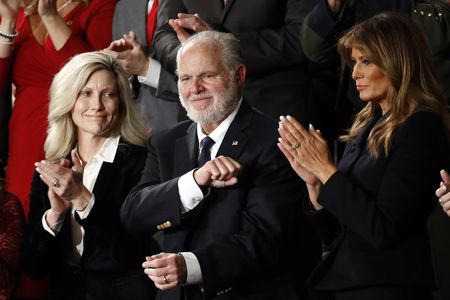 Limbaugh, who pioneered the conservative media revolution, had been diagnosed with Stage IV advanced lung cancer back in February 2020.

Limbaugh had been absent from his show for the last two weeks as he received cancer treatment.

He awarded the Presidential Medal of Freedom by President Donald Trump at the State of the Union address shortly after he announced his diagnosis.

He was awarded the Presidential Medal of Freedom - the highest civilian honour in the USA - in February of 2020.

First Lady Melania Trump presented him with the honor after her husband lauded Limbaugh as "a special man beloved by millions of Americans" and "the greatest fighter and victor that you will ever meet".

At that time, he mentioned that his cancer was likely terminal.

He had vowed to do his program "as normally and as competently" as he could while undergoing treatment. He's been a friend for nearly 30 years and all of us are praying for him.

"The Rush Limbaugh Show" began with only 56 radio stations in 1988 and grew to be the nation's most listened-to radio show, airing on more than 600 stations.