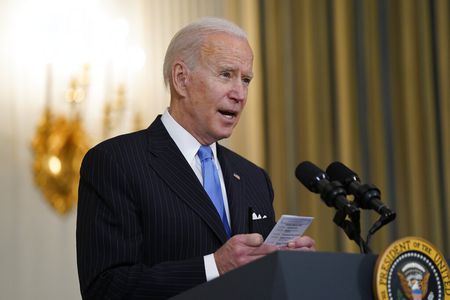 President Joe Biden and Democrats agreed to tighten eligibility limits for stimulus checks, bowing to party moderates as leaders prepared to move their $1.9 trillion COVID-19 relief bill through the Senate.

The changes are a nod to moderate Democrats in the Senate who have pushed for a more targeted approach to a third round of stimulus payments.

Under the legislation, individuals earning up to $75,000, and couples up to $150,000, would get $1,400 checks per person. The full amount of the checks remains unchanged at $1,400, but the amount would phase out quickly for higher earners.

However, under the new terms set by Senate Democrats, individuals earning $80,000, heads of households making $120,000 and married couples with $160,000 in income would no longer receive the relief payments.

White House press secretary Jen Psaki told reporters at the White House that Biden is pleased with the progress on the bill and has always been aware that there would be suggestions and negotiations while finalizing the bill.

There are also concerns that the payments will be based on 2019 income unless taxpayers have already filed their 2020 tax returns and had them accepted by the IRS. Their analysis found 297 million adults and children would benefit under the bill passed in the House, but only 280 million people would in the Senate version of the bill.

"Democrats had a choice", McConnell said.

The Senate could start debate on the package as early as Wednesday night.

The bill would pay for vaccines and medical supplies, boost jobless assistance and send a new round of emergency financial aid to households, small businesses and state and local governments.

Democrats are passing the bill through budget reconciliation, a process which allows for limited debate time and for legislation to pass with a simple majority.

The bill passed the House without any Republican support and is not expected to get any votes in the Senate.

Lawmakers are now awaiting a score from the non-partisan Congressional Budget Office to ensure the legislation can be passed under Senate reconciliation rules.