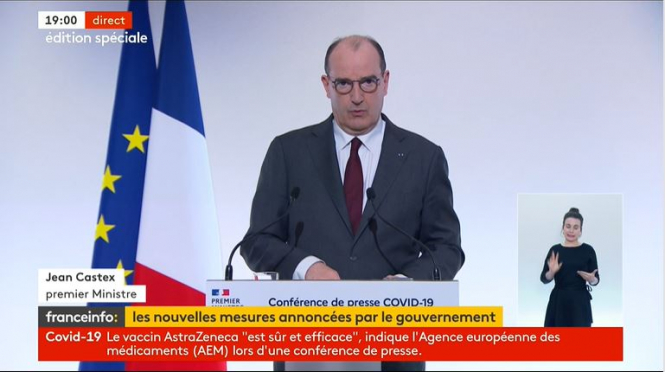 French President Emmanuel Macron on Wednesday said the country was in a third wave of infections mostly due to the British COVID-19 variant.

Since late January, when he defied the calls of scientists and some in his government to lock the country down, Macron has said he would do whatever it took to keep the euro zone's second largest economy as open as possible.

France was one of more than a dozen European Union states that suspended use of the Anglo-Swedish vaccine this week following reports of blood clotting in a small number of recipients of the shot.

Sixteen regions of France - including Paris - have entered into a new lockdown, the country's prime minister Jean Castex has announced. Intensive care wards are under severe strain, notably in Paris where the incidence rate surpasses 400 infections in every 100,000 inhabitants.

"The epidemic is getting worse".

According to Castex, who spoke during a news conference, the measures will come into effect on Friday from 7pm. Castex said he will be inoculated with the jab in order to restore confidence in the country.

The measures will be in place for at least four weeks and will be less restrictive than those last March and November. "(It is) the time we need to reach a threshold in the vaccination of the most vulnerable".

The national curfew will begin at 19:00, instead of 18:00, from this Saturday in all regions of metropolitan France, including those that will be under full lockdown from Saturday.

In addition to the lockdown, Castex said schools, essential shops and bookstores will remain open while non-essential businesses will close and movement outside will be restricted in the affected regions.