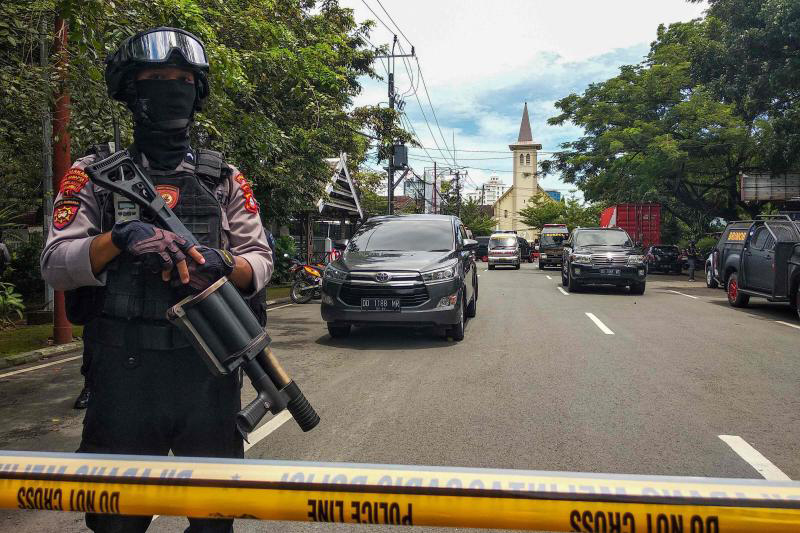 A suspected suicide bomb attack targeted Catholics leaving a cathedral after Palm Sunday Mass on the Indonesian island of Sulawesi.

Indonesian national police said two people were suspected of carrying out a bomb attack in the city of Makassar, after local police said the bomber had acted alone.

At the site of the blast, the police found a destroyed motorcycle and some body parts.

Indonesia has seen a string of attacks by Islamic extremists over the past two decades, including the 2002 Bali bombings which killed more than 200 people, mostly foreign tourists.

TVONE said the one person killed was the attacker.

"I call on people to remain calm while worshipping because the state guarantees you can worship without fear", Widodo said in a televised address.

The powerful blast outside a church hosting around 100 people in Makassar city on Sulawesi island happened around 10:30 am local time (0330 GMT) and left at least 14 church officials and congregants injured by debris, police said.

The guard, identified only as Kosmas, prevented the bombers from entering the church yard, National Police spokesman Inp.

There has been no immediate claim of responsibility for the attack.

Pope Francis prayed for the victims of the attack, according to Vatican Media.

An Indonesian anti-terror policeman stands guard as police seal the area after an explosion outside a church in Makassar on 28 March 2021.

Later, the country's chief security minister, Mahfud MD, described the attack as "a suicide bombing" committed by two people, both of whom had died.

Authorities were looking into which networks the bombers came from and if the attack was linked to recent arrests of suspected militants, Reuters news agency reported Yuwono as saying.

It was the first attack claimed by Islamic State in Southeast Asia.

While Jemaah Islamiyah has been weakened over the past decade by a sustained crackdown, in recent years a new threat has emerged in militants who fought with the Islamic State group in Iraq and Syria and returned to Indonesia or those inspired by the group's attacks overseas.