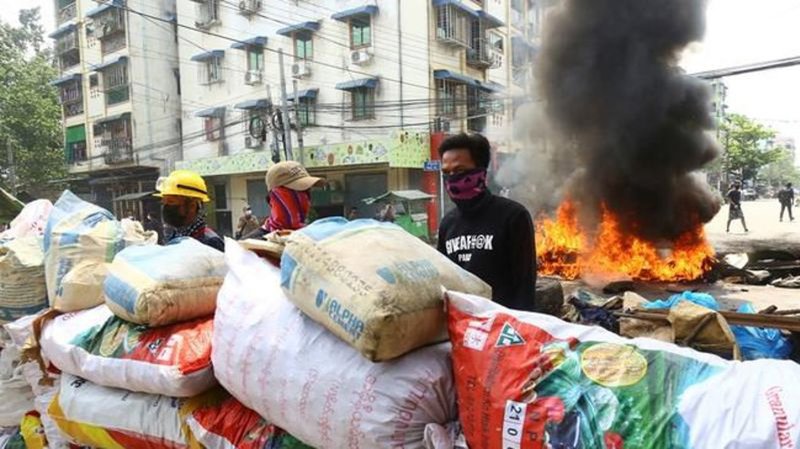 The junta on Saturday staged a major show of might for its annual Armed Forces Day as the death toll since the February 1 coup climbed to at least 423, according to a local monitoring group.

Funeral services were also held on Sunday for some of the victims of Saturday's events.

In the town of Pathein in the Ayeyarwaddy region, one man was shot dead by security forces on Sunday evening, DVB TV News reported on Monday.

In Yangon, the country's largest city, meanwhile, mourners flashed the three-finger salute as they wheeled the coffin of a 13-year-old boy.

The use of deadly force to crack down on demonstrations has been intensifying since the military ousted Aung San Suu Kyi's elected government on February 1.

The coup reversed years of progress toward democracy after five decades of military rule and has again made Myanmar the focus of global scrutiny. At least 89 deaths, including children, were recorded by the Assistance Association for Political Prisoners.

The EU delegation to Myanmar said Saturday would "forever stay engraved as a day of terror and dishonor".

The top defense chiefs from the United States and its allies including Japan on Saturday condemned violence by Myanmar's security forces that led to the deaths of more than 100 civilians the same day.

In recent days, the junta has portrayed the demonstrators as the ones perpetrating violence for their sporadic use of Molotov cocktails.

Rebels in eastern Myanmar's Karen state said they had been targeted in air strikes late Saturday, hours after the ethnic armed group seized a military base.

UN Special Rapporteur for Myanmar Tom Andrews said the army was carrying out "mass murder" and called on the world to isolate the junta and halt its access to weapons.

Earlier this month, the 66-year-old Trinamool Congress chief was injured; she said was pushed by four or five people against her auto and had the door shut on her at a time when there was no police personnel around her.

It's still not clear what action is possible - or how quick it could be.

The Security Council has condemned the violence but not advocated concerted action against the junta, such as a ban on selling it arms. China and Russian Federation are both major arms suppliers to Myanmar's military as well as politically sympathetic. Human rights group Amnesty International also criticized the hesitancy to do more.

"U.N. Security Council member states' continued refusal to meaningfully act against this never-ending horror is contemptible", said Ming Yu Hah, the organization's deputy regional director for campaigns. Demonstrations were held in Yangon and Mandalay, the country's two biggest cities, and in other areas.

The Karen National Union is one of more than a dozen ethnic organizations that have been fighting for decades to gain more autonomy from Myanmar's central government.

How have other leaders reacted?