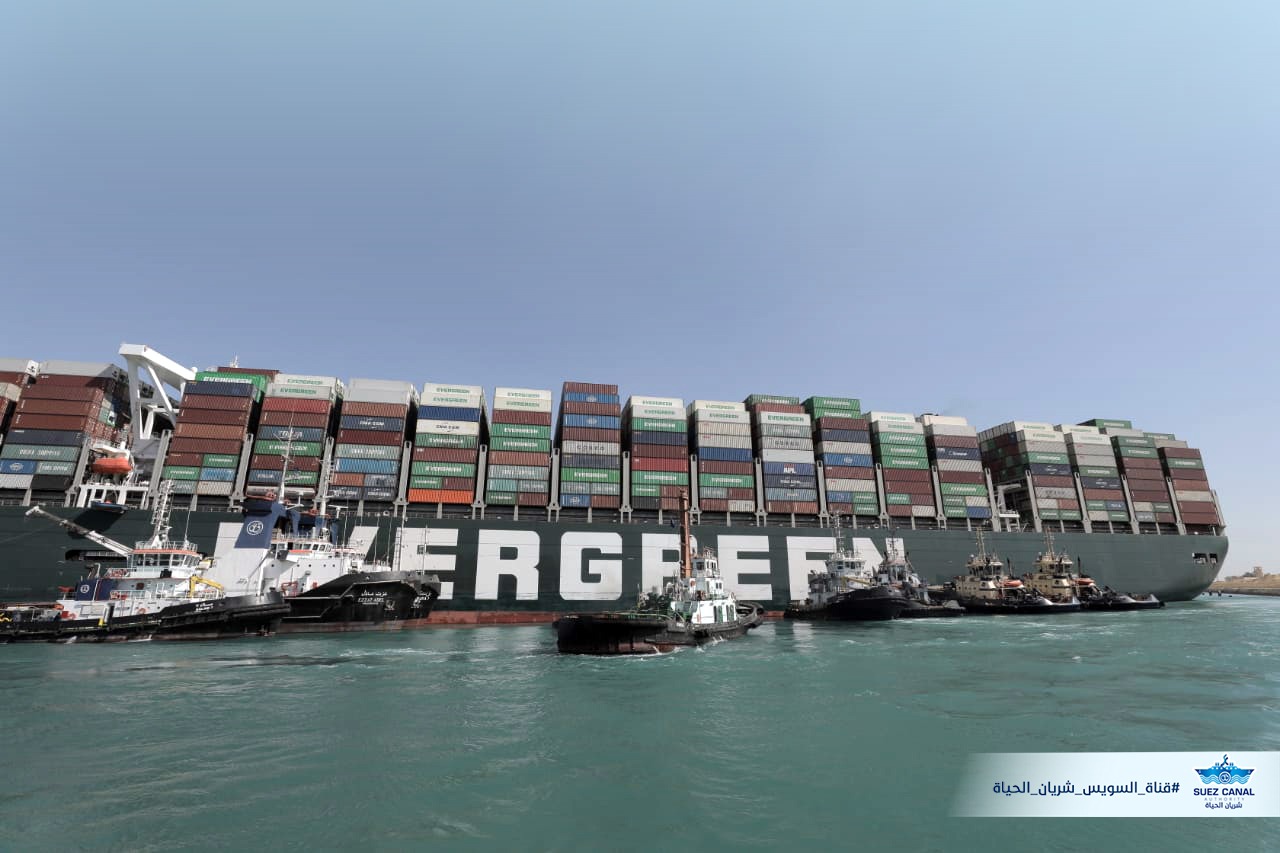 The 120-mile Suez shortcut is used by 12 percent of the world's shipping.

Aerial photos of the Suez Canal show just how bad the traffic jam of ships has become in recent days.

The stranded container ship blocking the Suez Canal for nearly a week was re-floated on Monday and is now being secured, Inchcape Shipping Services said, raising expectations the vital waterway will soon be reopened.

So far, 27,000 cubic meters of sand and mud have been removed from around the ship.

The Italian-flagged tugboat Carlo Magno was also close, having reached the Red Sea near the city of Suez early Sunday, satellite data from MarineTraffic.com showed.

The MV Ever Given, longer than four football fields, had been wedged diagonally across the canal since last Tuesday, towering over nearby palm trees and strangling world supply chains. At least 367 vessels, carrying everything from crude oil to cattle, were still waiting to pass through the canal, while dozens more were taking the alternate route around the Cape of Good Hope at Africa's southern tip, adding some two weeks to journeys and threatening delivery delays.

Rabie raised hopes on Saturday that the Ever Given could be freed by Sunday.

Rabie later told an Egyptian news channel that the ship "moved 30 degrees from left and right" for the first time late on Saturday.

"It is a good sign", he said, adding that 14 tugboats were deployed around the stricken vessel and salvage crews were working round the clock.

Hopes have been pinned on the spring high tide expected to start on Sunday night.

Once the tugboats arrive, it could take a few hours to hook up to the Ever Given, he said.

Some ship managers last week made a decision to reroute their cargoes around the Cape of Good Hope, adding about two weeks to journeys and extra fuel costs.

The effects of the crisis are already clear.

Officials have blamed 40-knots gusts and a sandstorm for the accident.

North and Latin America are likely to be less affected than Europe by the blockage in the Suez Canal, because much of the shipping container traffic that runs between the Americas and Asia moves through the Pacific to hubs like the Ports of Los Angeles and Long Beach, or crosses through the Panama Canal.

In contrast, Lloyds List said the blockage is holding back an estimated $9.6bn worth of cargo each day between Asia and Europe. Already, Syria has begun rationing the distribution of fuel in the war-torn country amid concerns of delays of shipments arriving amid the blockage.

The EU director of NGO Animals International Gabriel Paun warned that thousands of animals being transported on the vessels - mostly Romanian - could be at risk of dying if the situation is not resolved in the next few days.