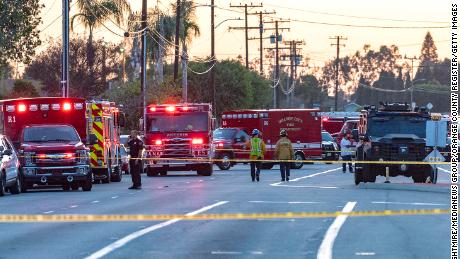 Four people, including one child, were killed and a fifth wounded in a shooting at an office building in Orange Wednesday and the suspected shooter was taken into custody.

Officers responded to reports of gun shots in the 200 block of West Lincoln Avenue in the city at around 5:30 p.m., the Orange Police Department said.

An officer-involved shooting occurred and a suspect was transported to the hospital, Amat said. It's unclear who shot the suspect, who was in critical condition.

California Gov. Gavin Newsom tweeted his condolences following early reports of the shooting. "Our hearts are with the families impacted by this awful tragedy tonight". Some facts reported by the media may later turn out to be wrong.

Signs outside indicated a handful of businesses were located there, including an insurance agent and a counselling service.

U.S. Rep. Katie Porter, a California Democrat whose district includes the city of Orange, said on Twitter that she was "deeply saddened".

A Facebook livestream posted by a resident who lives near the office appeared to show officers carrying a motionless person from the building and officers providing aid to another person.

A shooting at a Southern California office building on Wednesday left several people dead and injured and also led to officers firing shots, authorities said. In Atlanta on March 16, a gunman shot and killed eight people, six of them women of Asian descent, at three spas.

"I can tell you that we haven't had an incident like this in the city of Orange since 1997", Amat said.