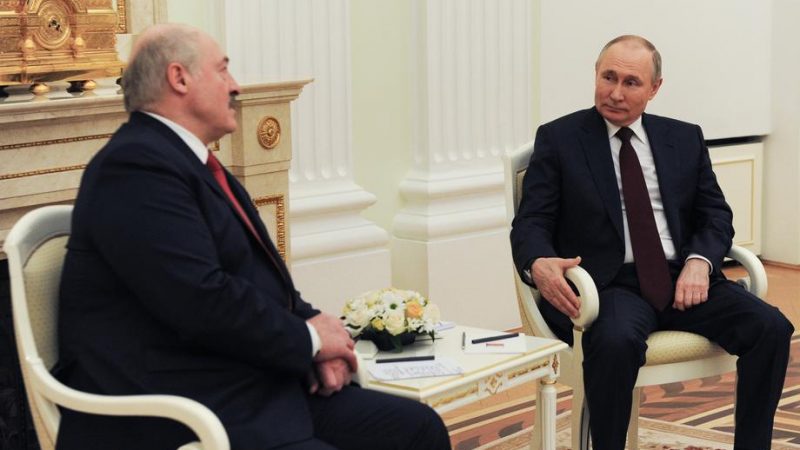 Belarusians living in Poland and Poles supporting them hold up a placard reading "Freedom to Roman Protasevich" during a demonstration in front of the European Commission office in Warsaw on May 24, 2021, demanding freedom for Belarus opposition activist Roman Protasevich a day after a Ryanair flight from Athens to Vilnius carrying the dissident journalist was diverted while in Belarusian airspace.

Once the plane landed, Protasevich - the 26-year-old co-founder of opposition Telegram channel Nexta, which coordinated last year's protests against Lukashenko - and his Russian girlfriend Sofia Sapega were arrested.

President Alexander Lukashenko said a claim that the fighter jet forced the Ryanair plane to land was an "absolute lie" and defended the diversion of the flight as a necessary response to a bomb threat.

Protasevich, who had been living between Poland and Lithuania, appeared in a video on Monday in which he confessed to helping to organise mass unrest, a charge that could land him in jail for 15 years.

European leaders are now accusing authorities in Minsk of essentially hijacking the passenger flight and they agreed this week to cut air links with Belarus and told airliners to avoid the country's airspace.

Lukashenko has faced unprecedented pressure at home from months of protests triggered by his reelection to a sixth term last August, in a vote that the opposition and many Western nations reject as rigged.

The Belarusian opposition has called for stronger measures.

The Kremlin said on Wednesday there was no reason to doubt statements made by the Belarusian leader. But Russia's support for Minsk means the UN Security Council is unlikely to agree a collective statement.

Russia's transport ministry told AFP that it had "no comment for now".

His father Dmitry Protasevich said that his son's lawyer was told that the journalist was not in his detention cell. "They're going to kill him in there!"

We will enhance our efforts, including through further sanctions as appropriate, to promote accountability for the actions of the Belarusian authorities.

Tens of thousands took to the streets to demand the resignation of 66-year-old Mr Lukashenko, who has ruled over Belarus for over two decades.

"I want you to relay our appeal everywhere, throughout the world, to government representatives, to European Union countries, to European Union leaders, to USA leaders: I am appealing, I am begging, help me free my son", his mother Natalia told journalists in Warsaw, visibly moved.

Lukashenko is scheduled to visit Russian Federation on Friday to hold talks with President Vladimir Putin.

Tikhanovskaya on Wednesday urged the European Parliament to ban both new foreign investments in Belarus and the country's main exports.