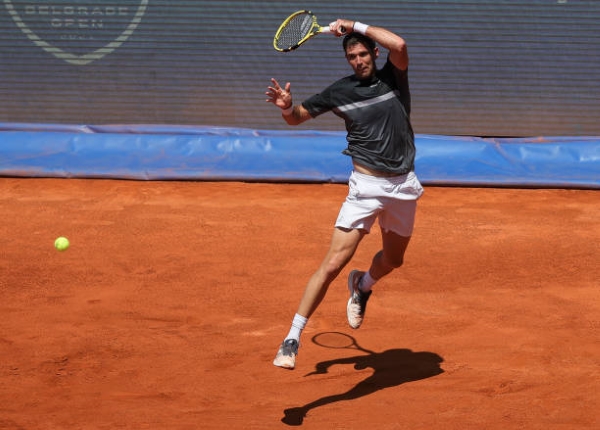 Osaka was fined $15,000 for skipping her news conference after her first round win on Sunday and was warned of possible expulsion from Roland Garros and future Grand Slams if she failed to meet her media commitments.

The German, twice a quarter-finalist in Paris, was beaten 6-2 6-4 by a very in-form player in qualifier Anhelina Kalinina, who has now won her last 14 matches.

In addition to Sunday's fine, Osaka drew a surprising warning from all four Grand Slam tournaments that she could face stiffer penalties, including disqualification or even suspension, if she continues to avoid the media.

The joint statement was signed by the organizers of the four Grand Slam tournaments - the Australian Open, the French Open, Wimbledon and the US Open.

"I think now the best thing for the tournament, the other players and my well-being is that I withdraw so that everyone can get back to focusing on the tennis going on in Paris", Osaka wrote in a statement released via her Twitter account Monday.

She also said speaking with the media makes her anxious.

Tennis players are required to attend news conferences if requested to do so.

Despite her media snub, Osaka did take part in a short and rather awkward on-court interview for the few hundred fans allowed into Court Philippe Chatrier following her victory over Romanian Tig.

Tennis star Naomi Osaka has withdrawn from the French Open and is taking time away from the sport to focus on her mental health.

Martina Navratilova, an 18-time Grand Slam champion, tweeted that she is "so sad about Naomi Osaka", adding that "perhaps the mental & emotional aspect gets short shrift". The maximum fine, of course, is not a big deal to Osaka, the world's highest-earning female athlete thanks to endorsement contracts totalling tens of millions of dollars.

She had said last week on social media she would not speak to the media and kept that promise.

In the statement, the Grand Slams said the athletes' mental health is important and they are open to dialogue with Osaka and others on the topic, but they reminded her of her media obligations because they are required to treat all players equally.

Osaka, who was next scheduled to take on Ana Bogdan in the second round Wednesday, said she hoped she could have a conversation with officials from the WTA upon her return.

"I respect her, of couse, as an athlete and her personally". She also revealed that she had written privately to apologise the organisers at the French Open in the days following her decision, although it would seem that the focus of her apology was for the disruption caused by her original decision rather than the rationale behind it.

"It's much, much different when you suddenly get a success".