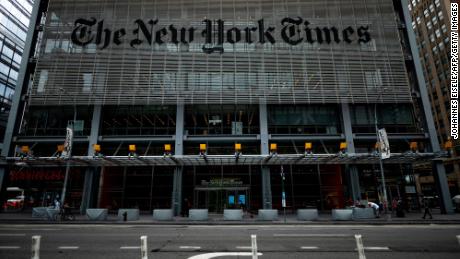 After the most recent revelation - that the Justice Department in the Trump administration had secretly seized the phone records of four New York Times reporters - White House press secretary Jen Psaki reaffirmed the commitment to freedom of the press.

The Times broke news Wednesday night that the phone records of reporters Matt Apuzzo, Adam Goldman, Eric Lichtblau, and Michael Schmidt - from January to April 2017 - were seized by the DOJ in 2020. A Justice Department spokesman said on Wednesday that law enforcement officials obtained the records in 2020, and said that "members of the news media have now been notified in every instance" of leak investigations from the 2019-2020 period in which their records were sought. The Biden administration has already informed CNN and The Washington Post that the phone records and email logs of its reporters were secretly obtained a year ago, a practice that President Biden said is "simply, simply wrong" and will not happen under his administration.

The Justice Department did not disclose which article it was investigating, according to the newspaper.

Trump's DOJ secretly obtained the phone records of four NYT journalists, the The Times reported. "The Department of Justice should immediately make clear its reasons for this intrusion into the activities of reporters doing their jobs, an activity protected under the First Amendment". "Clearly, Google did the right thing, but it should never have come to this", New York Times Executive Editor Dean Baquet told the newspaper, which reported that the gag order prevented executives from telling him about the issue. The department said the reporters are neither subjects nor targets of the investigation, but did not reveal which leak was under investigation.

The newspaper said the timing of the seized records and the reporters involved in the investigation suggest that the leak probe involved an April 22, 2017, Times report about former FBI Director James Comey's handling of different investigations during the 2016 election.

Democratic and Republican administrations alike have used subpoenas and court orders to obtain journalists' records in an effort to identify sources who have revealed classified information.

After those disclosures, Biden told a reporter he would not allow the Justice Department to persist in obtaining reporter phone records.

After blowback, Holder announced a revised set of guidelines for leak investigations, including requiring the authorization of the highest levels of the department before subpoenas for news media records could be issued.