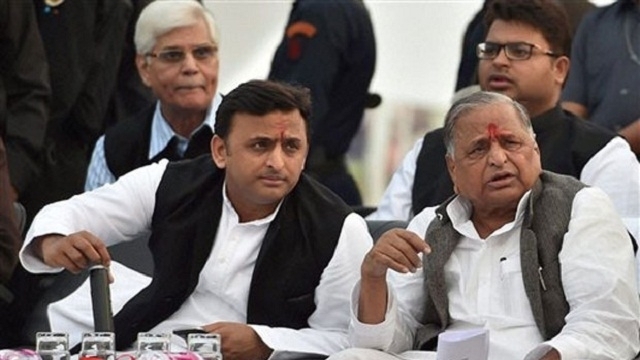 A senior party functionary said, "The SP constitution was written by Ram Gopal Yadav and there is no one who knows it better".

Both the factions are now preparing to take their battle to the Election Commission to establish themselves as the "real Samajwadi Party" leaders and retain the party symbol, which is the cycle. Candidates recommended by Shivpal Yadav were favoured, including some with criminal backgrounds who were fiercely opposed by the chief minister.

Reports quoting media sources said the RJD chief talked to both the SP chief and the UP chief minister separately, and urged them to stay together at this crucial time to defeat the BJP.

Warning his son and UP CM Akhilesh Yadav, Mulayam said that he doesn't know that Ram Gopal is is hurting his future.

Some senior party functionaries loyal to Akhilesh also attended the meeting at the chief minister's official residence at 5-Kalidas Marg.

The decision by SP supremo was taken after Akhilesh on Thursday announced his own list of 235 candidates for the upcoming assembly elections. Notable absentee from Shivpal's meeting was the party's founder member Azam Khan who accompanied Akhilesh to Mulayam's residence instead. "Netaji has given the order that the suspension orders of Akhilesh and Ram Gopal are terminated with immediate effect", Shivpal said.

Agrawal said "Netaji" has no right to remove them after UP Chief Minister Akhilesh Yadav became Samajwadi Party's chief.

Asked about Sunday's meeting of party's national delegates, Shivpal said that no meeting would now be held.

The list did not include the names of three ministers known for their proximity to the Chief Minister. The list reportedly included Akhilesh's supporters, and excluded some of his father's loyalists. Mulayam had expelled the two for "indiscipline" on Friday evening. Posters of candidates with "Akhilesh Samarthak" (Akhilesh supporters) written boldly also sprang up all over Lucknow nearly overnight, giving a clear indication of the things to come. Though Mulayam has called the party meet, it remains to be seen who will address the meeting as Akhilesh may try to assume the role of party chairman that day.