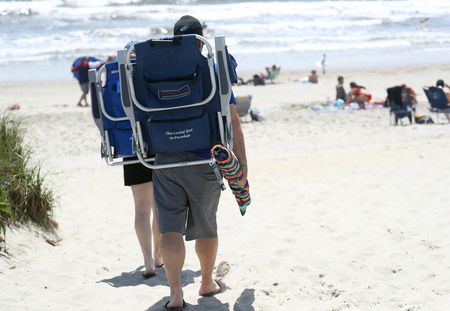 The New York Racing Association (NYRA), which operates three major horse racing tracks, including Belmont Park, the home of the third and final leg of the Triple Crown, applauded the move.

De Blasio has said that most New Yorkers are following guidelines banning gatherings and requiring face coverings in public.

Most measures of the impact of the coronavirus in NY were down, Cuomo said Saturday, including total hospitalizations, the net change in intubations and daily hospitalizations.

New York, along with the nearby states of New Jersey, Connecticut and DE, will partially reopen beaches for the Memorial Day holiday weekend on 23-25 May, Cuomo has added.

"They are now qualified for reopening", said Cuomo during an Albany press briefing.

"We're not going to tolerate people starting to congregate".

If they want to open, they must meet the state's restrictions, including crowd regulating and enforcing social distancing measures.

The Jersey Shore beach reopening goes into effect May 22, the beginning of Memorial Day weekend - the unofficial start of the summer season.

An agreement with CVS will allow samples to be collected at more than 60 pharmacies across the state, Cuomo said.

Cuomo extended the state's "New York State on PAUSE" policy, which had been put in place since March to curb the transmission of COVID-19-the disease caused by the Chinese Communist Party (CCP) virus-and was set to expire on Friday. "Under this emergency declaration, actions we take are only good for 30 days", he said.

New York's PAUSE order has created the need for restaurants to get creative with their business models- some pivoting to creating hand sanitizer while others have shut down regular operations to open themselves up as food banks.

Five other regions - Central New York, the Finger Lakes, the Mohawk Valley, the North Country and the Southern Tier - have already begun the first phase of reopening, which includes such low-risk businesses as construction, manufacturing, landscaping and curbside pick-up retail.

Club Brugge champions of Belgium after season abandoned
The Jupiler Pro League had always been expected to close its doors early, with there being only game left of the regular season. The two teams that are in this final are Club Brugge and Royal Antwerp. 5/18/2020

Lockdown 4.0 Extended Till May 31 Across India
The shops will have to ensure six feet distance among customers; and more than five people should not be allowed at one time. All domestic and global flights, metro train, schools, colleges, hotels, restaurants will continue to remain shut. 5/18/2020