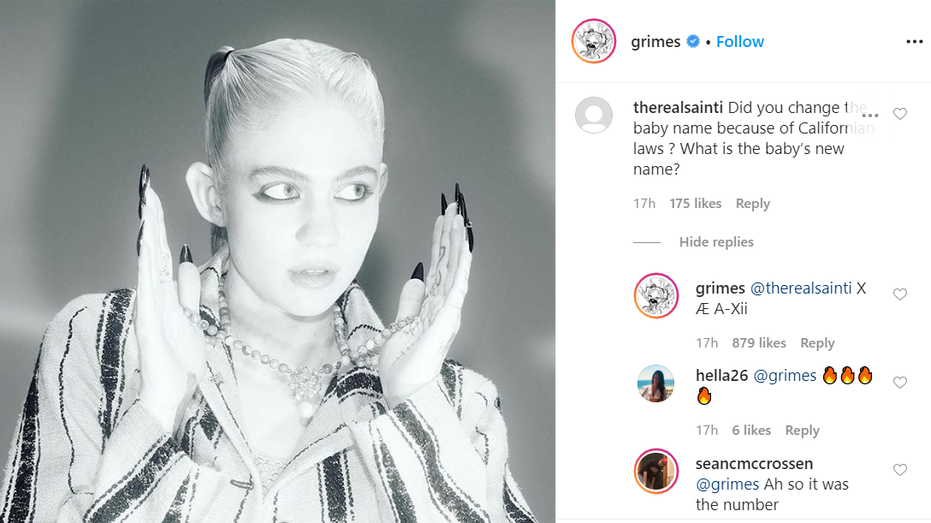 Grimes and Elon Musk have changed their baby boy's name, the "Miss Anthropocene" singer said, after it failed to comply with California law.

Grimes gave no explanation for the change to using Roman Numerals, but later responded to a post asking if the adjustment was made to comply with a California law that holds only the 26 letters of the alphabet can be used for child names. He was originally named X Æ A-12, but will now be known as X Æ A-Xii. "What is the baby's new name?" asked a fan on Grimes' new upload.

"Thus, you can't have numbers, Roman numerals, accents, umlauts or other symbols or emojis", he explained.

It seems as though their way around California laws was to use Roman numerals instead of the actual number 12.

"First of all, my partner is the one that, actually, mostly, came up with the name", the Tesla and SpaceX CEO said.

The fan who posed the original question then explained: "You aren't allowed to have numbers in your name so she replaced the numbers with Roman numerals".

The Canadian musician revealed in a series of Instagram replies Sunday that the official, written name of her first child with the Tesla billionaire is no longer X Æ A-12.

She also shared that part of the name is a tribute to the CIA's Lockheed A-12 reconnaissance plane, which has "no weapons, no defenses, just speed".

Musk and Grimes have changed their child's name. "Great in battle, but non-violent", she added.

The new name is a bit more legal than the previous one.

In a recent interview on the Joe Rogan Experience podcast, Musk elaborated more on the origin of the unique moniker, saying its pronounced X Ash Archangel.