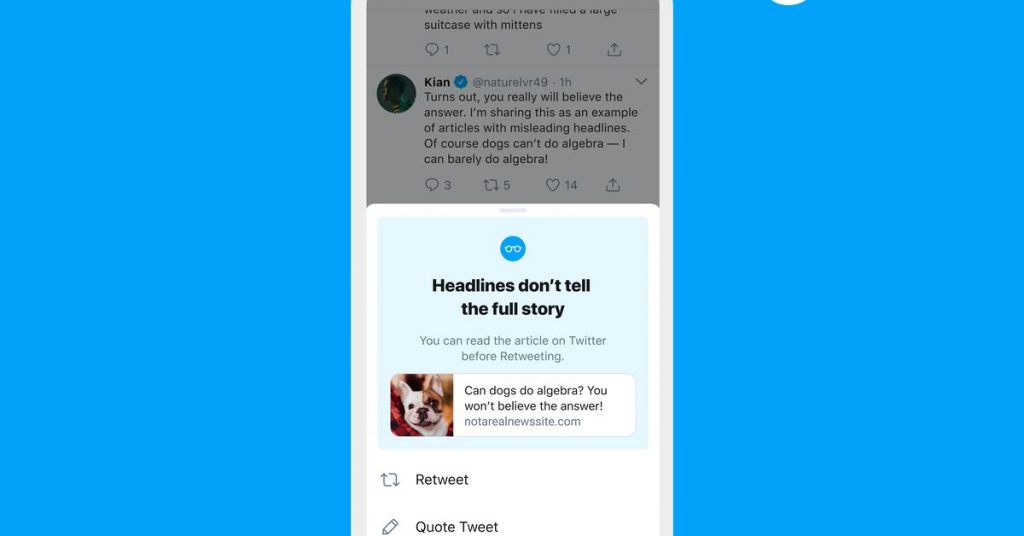 "Some Tweets are best left in drafts", the company noted.

"Some people didn't end up RTing after opening the article - which is fine!" Encouraging people to read the article they want to share is a logical way to promote media literacy and stop some "knee-jerk reactions" that can make misinformation go viral.

In June, Twitter introduced a test feature on Android to promote "informed discussion" on the platform - something social media's staccato conversational bursts are rarely conducive to.

The microblogging platform had begun testing a feature on Android that prompted users to read an article that they hadn't opened on Twitter before retweeting it.

The official Twitter Comms handle revealed that after seeing the prompt, users actually opened articles 40% more often, and that the number of users who actually read an article before retweeting it rose by 33%.

"This can be powerful but sometimes risky, especially if people haven't read the content they're spreading".

In June, the company began testing a new prompt for users of its Android app created to make sure that they had read articles before sharing them. It works like this: When attempting to retweet an article you haven't clicked into, Twitter will display a prompt advising you to first read the content before circulating it.

Besides this, Twitter is also working on a feature that warns users before they send offensive replies.

Twitter further said that it is working on making the prompt smaller after the users have seen it once.