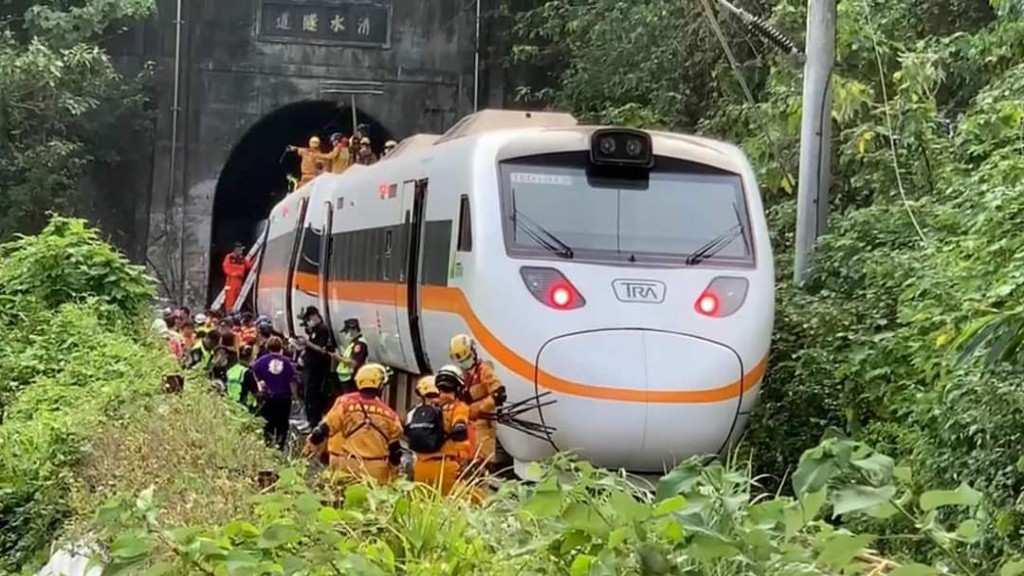 As fix work takes place on the track from where the train derailed, trains will run on a parallel track, with a delay of 15-20 minutes.

The from of the eight-carriage train with 492 passengers and four crew members hit the vehicle shortly before entering a tunnel, dpa news agency quoted officials as saying. The truck was parked on the hillside but rolled onto the tracks, as authorities said its emergency brake was not properly engaged.

At least 50 people were killed Friday as a crowded train derailed in a tunnel in eastern Taiwan in the worst railway accident on the island in decades.

The train was carrying 494 people at the start of a long holiday weekend on Friday when it smashed into the construction truck that slid down a hillside above the tracks, the Taiwan Railway Administration said.

Rescue workers remove a part of the derailed train.

Prosecutors aimed to have Yi-hsiang detained on charges of causing death by negligence, a justice ministry confirmed to reporters via Yahoo!

Lee had been released on bail, though the high court's Hualien branch on Sunday rescinded that decision after the prosecutors appealed it, sending the case back to the lower court.

The court said that while the truck's fall into the path of the train possibly resulted from negligence, there was "no possibility of conspiracy".

His lawyer told reporters that Lee wanted to face up to what had happened and was apologetic and expressed regret.

The youngest person confirmed to have died was a 6-year-old girl, the oldest a 79-year-old man, according to a government-issued casualty list. Other mangled sections remained in the tunnel, where fire department official Wu Liang-yun said more bodies were likely to be found.

His office said President Tsai Ing-wen had ordered hospitals to be prepared to receive multiple victims.

As a mark of respect for the victims of the crash, flags in Taiwan will fly at half-mast for three days, starting Saturday.

Taiwan's transport minister said on Sunday he would not shirk his responsibility for a deadly train crash even as his resignation offer was rejected amid growing questions over safety lapses that could have contributed to the disaster.

Media published on the site showed a yellow flatbed truck on its side, near the train.

In a rare sign of goodwill from China, which claims Taiwan as its own territory, President Xi Jinping expressed his condolences over the crash, state news agency Xinhua said.

The TRA on Saturday said it would review its ticket policy as 120 passengers had standing tickets when the derailment occurred on the first day of a four-day break for Taiwan's annual tomb-sweeping tradition, which sees many Taiwanese people return home to pay tribute to their ancestors and clean up family tombs.