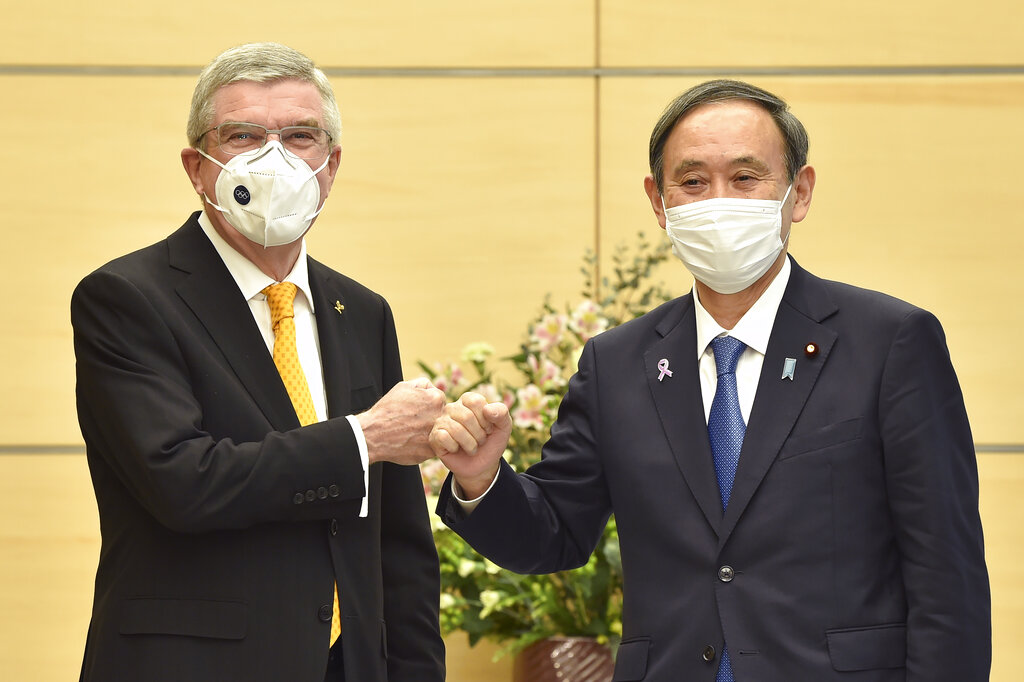 Suga, who is on a state visit to the U.S., said at a press conference on Friday that he told President Joe Biden he was committed to moving forward with the Games and that Biden offered his support.

At an event hosted by Washington's Center for Strategic and International Studies think tank after a day of talks with Biden, Suga said Japan would "firmly raise its voice" on issues like Myanmar, Xinjiang and Hong Kong and work with the international community to seek concrete actions.

The document says Suga and Biden shared their concerns over Chinese activities that are inconsistent with the worldwide rules-based order.

The two leaders, both just months in office, announced a partnership aimed at improving coordination on the pandemic response and future global health challenges.

Suga, for his part, said that the two leaders agreed to "oppose any attempts to change the status quo by force or coercion", in a dig at China.

In a joint statement released after the meeting, the leaders reaffirmed their commitment to quadrilateral cooperation between their countries.

Suga said he told Biden "about my determination to realize the Tokyo Olympic and Paralympic Games this summer as a symbol of global unity", and that Biden offered his support.

Biden referred to his counterpart as "Yoshi", as though they were longtime friends. Coincidentally, the meeting with Japan's leader comes just days after Biden announced a final US withdrawal from Afghanistan by September 11, a shift partly predicated on the desire to focus more on East and South Asia. That helped guide Biden's decision, announced this week, to pull US troops out of Afghanistan and free the administration to focus more on East Asia.

Japan, which depends on unfettered shipping through the Strait of Taiwan separating China and the island, has urged the U.S.to take a stronger position condemning China's recent provocative military flights across the waters.

Even with their mutual interest in a strong bilateral relationship, Biden and Suga's long-term diplomatic success is far from assured, given the challenges in the region and the difficulty of containing China, Japan's largest trading partner.

While the timing was coincidental, the official said it was appropriate that Biden was shoring up relations with a top ally two days after his momentous decision to withdraw from Afghanistan after 20 years, ending the longest-ever U.S. war.

It's unclear how prominent China's human rights record was in the two leaders' talks.

Sheila Smith, a senior fellow at the Council on Foreign Relations, told VOA that while the United States and Japan will want to present a united front on China, "both governments understand that this is a delicate moment in the relationship with China" and "they don't want to incite or provoke activities that they don't desire". "This summit captures the ultimate challenge: How do you balance those two requirements?" Earlier Friday, Suga placed a wreath at the Tomb of the Unknown Soldier at Arlington National Cemetery and visited with Vice President Kamala Harris. Biden and Suga on Friday are expected to announce steps through the Quad framework to help India produce COVID-19 vaccines.

Suga, Biden speak after Japan-US summit
In addition to Suga's meetings with Biden and other officials, he also met one-on-one with Vice President Harris earlier in the day. 4/17/2021