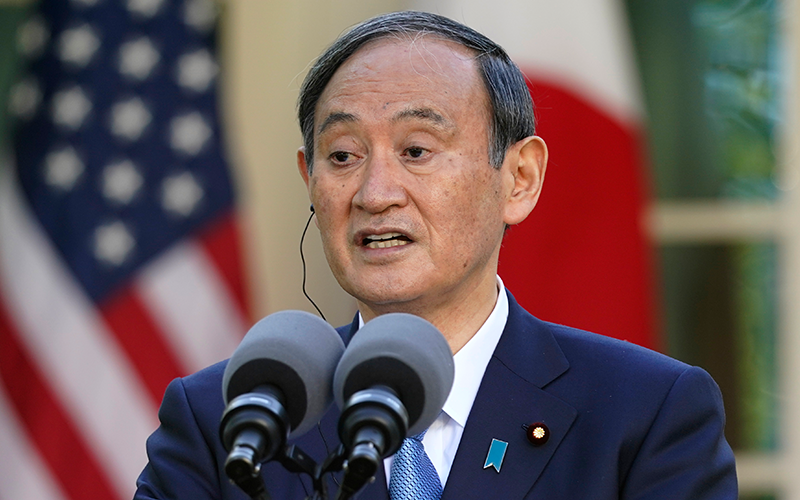 Sheila Smith, a senior fellow at the Council on Foreign Relations, told VOA that while the United States and Japan will want to present a united front on China, "both governments understand that this is a delicate moment in the relationship with China" and "they don't want to incite or provoke activities that they don't desire".

"President Biden once again expressed his support for this determination", Suga said.

The U.S. and Japan would like to "calm tensions" and "discourage provocations", the official said. It was one of many comments seen as a reference to China, which is increasingly flexing its economic and military strength internationally.

Suga and Biden, who wore masks for their meeting in a visit modified by precautions against the coronavirus, were seeking to challenge messaging from Chinese President Xi Jinping that America and democracies in general are on the decline following the political turmoil and global withdrawal that marked Donald Trump's presidency.

The Biden administration may also have tougher requests of Japan, including pressing Suga for a rare public statement of support from a Japanese leader for Taiwan.

With the Suga meeting and another planned summit with South Korea in May, Biden hopes to energize joint efforts with Australia, India and Japan in a grouping known as the Quad, as well as with South Korea, to counter China and longtime US foe North Korea.

In addition to Suga's meetings with Biden and other officials, he also met one-on-one with Vice President Harris earlier in the day. The two leaders addressed an array of geopolitical issues, including Taiwan, with Suga saying they reaffirmed "the importance of peace and stability of the Taiwan Strait," a slap at Beijing's increased military pressure on the Chinese-claimed, self-ruled island.

Before Suga's meeting with Biden, China's Foreign Affairs Ministry warned Japan against "being misled by some countries holding biased views against China".

Even with their mutual interest in a strong bilateral relationship, Biden and Suga's long-term diplomatic success is far from assured, given the challenges in the region and the difficulty of containing China, Japan's largest trading partner.

"Japan's basic policy on pending issues caused by China is to firmly assert what should be asserted and strongly request China to take specific action", he said. That came during a visit last month by Secretary of State Tony Blinken and Defense Secretary Lloyd Austin, which was the Biden administration's highest-level face-to-face meeting at the time. Japan is itself locked in a dispute with China over Beijing's claim to the Japanese-controlled Senkaku Islands, called Diaoyu in China, in the East China Sea.

President Barack Obama was seen as cajoling China, in hopes of encouraging reforms.

"I think we were able to establish a good relationship of trust", he added. And both countries are expected in coming days to make deeper commitments to cutting climate-wrecking fossil fuel emissions, in line with Biden's climate summit with 40 world leaders next week.

In another swipe at China, Biden said the United States and Japan will invest together in areas such as 5G, artificial intelligence, quantum computing, genomics and semiconductor supply chains.