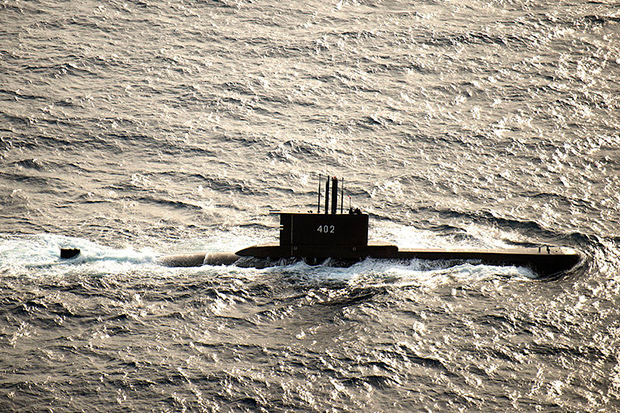 Mr Tjahjanto said the navy has deployed ships to search the area and has asked for help from Singapore and Australia, which have submarine rescue vessels.

A helicopter looking for the missing vessel spotted an oil spill in waters where the submarine was thought to have submerged, it added.

Tjahjanto told local outlet Kompas that the submarine disappeared in waters about 60 miles the north of Bali Island around 3 a.m. local time, but told Reuters they lost contact around 4:30 a.m.

"It is possible that during static diving, a blackout occurred so control was lost", the Indonesian navy said in a statement, suggesting that the sub could have descended to "a depth of 600-700 meters [2,000-2,300 feet]". In 2017, an Argentine military submarine went missing in the southern Atlantic with 44 crew on board.

Representatives of the defence departments of the two countries did not immediately respond to requests for comment. "We know the area but it's quite deep", First Admiral Julius Widjojono told AFP news agency.

Commander Marshal Tjahjanto will hold a media briefing to share further information about the search on Thursday from Bali, a spokesman said.

Indonesian submarine KRI Nanggala-402 is shown during preparation for an anniversary celebration of the Indonesian military in 2014 in Surabaya in East Java province.

The 1 300-tonne KRI Nanggala 402 was built in 1978, according to a government website. It underwent a two-year refit in South Korea that was completed in 2012.

Indonesia, which has been moving to upgrade its military equipment in recent years, has five German and South Korean-built submarines in its fleet.

Indonesia now has a fleet of five submarines and plans to operate at least eight by 2024.

In 2016, an Indonesian air force transport plane crashed into a mountain, killing all 13 people board, during a training exercise in the remote region of Papua.